During the last few weeks, rumors about an NFC-equipped iPhone 6 have emerged again. This is not surprising, because this rumor surfaces every year in July/August. But this time it’s different. This year’s rumors are reinforced by photographs that allegedly show an NFC chip on a supposed logic board of the iPhone 6.

We at xamoom are convinced that NFC still faces a great future and to all doubters, we would like to give a few figures on the usage of Near Field Communication (NFC).

Depending on the city, there are at Projekt Ingeborg, different, but relatively high usage figures, ranging from 22 to almost 37 percent. 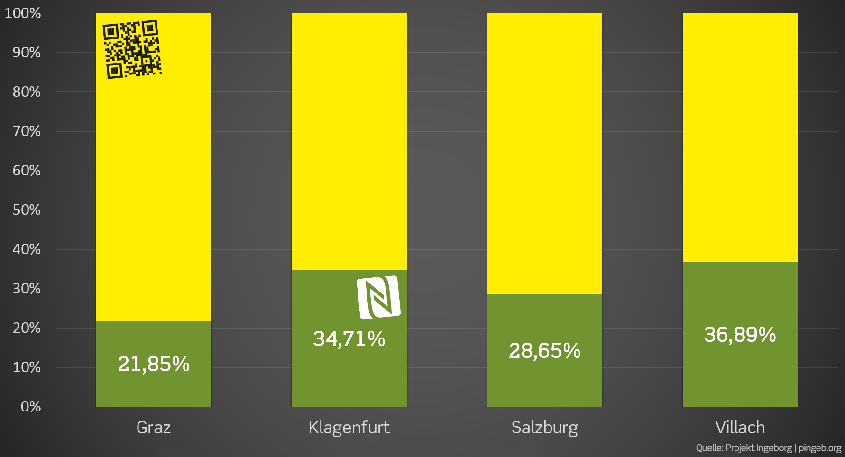 This is surprisingly high since the majority of smartphone users do not even know what NFC is and that it is built into their device. For us, it is amazing that even half of Klagenfurt’s pingeb.org users, who own an Android device, still scan the QR code (for which you must install a separate app beforehand).

Apple will make it sexy …

Would Apple have a problem coming late to the NFC party? Absolutely not! Apple has not been a pioneer in any gadget category. It improved on existing products and made it ready for the mass market.

iPhones and iPads could make NFC certainly much more popular. While other smartphone manufacturers do almost anything to hide NFC, Apple could finally fill it with life and make it an exciting technology.

We also do not fear that Californians will make it too proprietary. When the iPhone 6 eventually comes with NFC, very basic services, such as; opening URLs or exchanging contact information should continue to function just fine.

But we do hope that Apple will bring a different logo or a new icon; one that is less reminiscent of George Clooney’s favorite coffee.

And sexy will help xamoom.

Anyone who has already used NFC knows how cool this technology is. We demonstrated one (of many) cool use cases with our net culture project pingeb.org. With xamoom, we want to continue and extend our project.

The more users understand how to use NFC, the better it is for xamoom and everyone else in this field. Therefore, we would like to start a series in this blog which lists the benefits of NFC and show lots of examples.