The Ultimate iBeacon Guide for 2021

Many of our customers have beacon installations with more than 100 active units. The effectiveness of a beacon fleet and the total cost of ownership are set long before the first app user runs into their proximity.

The initial cost of 10 to 65 Dollar per unit is not the entire cost over their lifetime – you also need a budget for rolling out and maintenance.

We want to pass on our experiences of the past years – from tourism and big events to arts & culture and museums to proximity marketing for cities or real estate. The goal is to give you the best possible results for a given budget.

It’s a good idea to plan your locations and their content well before you roll out.

A good list is beneficial when it comes to planning all your locations. We’ve created such a list in Google Drive that anyone can either use in Google Drive or download as an Excel file.

The question is not to reach always most people but to reach the best ones. The highest transmission power can be detrimental because it might cause an overlap between individual transmitters. If in doubt, you should always throttle the performance by at least one of level, drawing smaller circles that do not overlap and cause less confusion for users.

2. Help with your buying decision

We do support every beacon from every manufacturer. They only need to adhere to Apple’s defacto standard called iBeacon and they must be freely configurable the IDs from the xamoom CMS.

There are about a dozen beacon manufacturers which mostly are based on the chipsets from Nordic Semiconductor. There are not many differences in the basic functionality – all work the same way. Whether you decide to buy the $ 10 Dollar cheap SmartBeacon 4AA from Sensoro or spend 65 Dollar on the most expensive HD 18-3 from kontakt.io – their primary purpose is always the same: the broadcast IDs.

The price differences come from the following features:

Also crucial for the purchase decision is the availability. It is not recommended to postpone the purchase for too long. Interestingly, China imports are usually faster (five working days) available than supplies from manufacturers in Poland or the United Kingdom. Imports from China are also quite unbureaucratic since there is no customs duty on imports of the iBeacons to the European Union.

Two budget beacons that we can recommend:

In addition, you need four AA batteries each, which cost about 1.20 Euro per piece.

Two high-end beacons that we can recommend:

Every iBeacon works the same way – it broadcasts three IDs:

Multiple beacons can have the same ID – for example, when the same content is to be served on a larger area or indoor as well as outdoor. For the app, this looks like a single big beacon.

Alternatively, multiple iBeacons with different IDs may have the same content. Both only seem to be the same because but they are different because of a concept called “cooldown”. During a rest period, no more notifications for one beacon ID are shown on mobile devices. If the IDs are different, the same notification will show up again multiple times.

In addition, most beacons also send telemetry data, which provide information about the battery charge. Some models also inform about air pressure or temperature. Apps can receive this data and respond accordingly. The telemetry data is ignored by most apps and only displayed by the configuration apps of the beacon manufacturers. However, it would also be conceivable that an app serves as a proxy to the backend where a database stores this data for a (later) examination.

iBeacons are configured via apps from their manufacturers. Some, such as kontakt.io, make this process very easy ​​through a web interface. For most other manufacturers, the configuration data can only be edited via a smartphone app. But even that is not as complicated as it was years ago.

In addition to the IDs, there are three more values to consider:

Because the first two factors have a significant impact on battery life, they should be planned precisely. Less is often more.

It’s critical to set a password for iBeacons. Otherwise, anyone with the correct configuration app (there are only a handful of manufacturers) could write new IDs on the iBeacon and “take it over”. Be sure to write down the password – preferably in the beacon deployment list.

The final setting can be done within the xamoom CMS. You can disable beacon notifications – de facto disabling the device – temporarily or permanently by removing the page from the spot (the spot will remain visible on maps) or disable the spot completely.

4. Equipment for the deployment tour

Worker on a ladder deploying an iBeacon

Not all iBeacons need to be installed at the same time. You can do this step-by-step. Insert the batteries into the device on-site or activate the beacons there. For this reason, the xamoom CMS also works wonderfully on the smartphone. So you avoid being annoyed by constant notifications.

In addition to the most efficient route, another consideration is essential: which tools and which mounting materials are needed on the go? Sometimes a ladder is necessary too. Thinks in advance saves a lot of time and kilometers later.

Which definitely has to go on the tour:

Google Photos helps to document the position of the iBeacons for colleagues.

Even though beacon scanner apps can lead you to the beacon by telling you the approximate distance, that does not mean that you will find it soon. Specifically, if the maintenance is done by another team member other than the one who did the roll-out, documentation is crucial.

This includes entries in the iBeacon deployment table mentioned above as well as photos. However, you should make sure that the pictures can be located again – the photo of a white corner in a house is rarely helpful. Two images per location – one wide-angle, one detail – are better.

Google Photos is helpful because the service also shows the geo-coordinates and photos on a map. Such albums can be shared with team members. Individual photos can be referenced via URLs and stored as well in the beacon table.

Especially where larger crowds are expected, beacons should be positioned as high as possible. The reason for this lies in the frequency with which Bluetooth transmits its data: water absorbs radio waves in the range of 2.4 GHz very well – and humans are made of a lot of water. The goal is, therefore to have as few people as possible between the transmitter and the smartphones. So beacons need to broadcast from high above.

Also, you should check with the manufacturer, how the beacon is constructed, and how its antenna is aligned. Each manufacturer can give useful tips for setting up. Choosing an expensive beacon with an extra long-range does not help, if you place it upside down.

Protection against theft and vandalism is also critical. Even if a beacon doesn’t serve anyone else, many have been opened or taken away by passers-by due to boredom or plain curiosity.

Two lower-range beacons are often better than one with a longer range. If you place them on opposite ends of a large square, you will not only reach niches but also ensure a reliable installation.

Finally, one should not forget that in many cases, permits for installation by third parties are to be obtained. Anyone who does this in advance saves time and nerves during the actual installation.

Stele in Zell am See-Kaprun

An iBeacon does not have to be visible to its users. This is both good and bad. When something is invisible, no one knows that there is anything useful in this place.

For increasing the usage, it is therefore vital to communicate the mobile information system on all available channels. Especially helpful are smart stickers or smart posters (smart because equipped with QR codes and/or NFC tags). It is ideal if the visible parts of the mobile information system also harmoniously embed themselves into its surroundings as in the example of our customer Zell am See-Kaprun.

Visible elements should inform and train the user:

Such information in public space not only promotes the use of the mobile service. They also contribute to the visibility of the project and thus of the company. 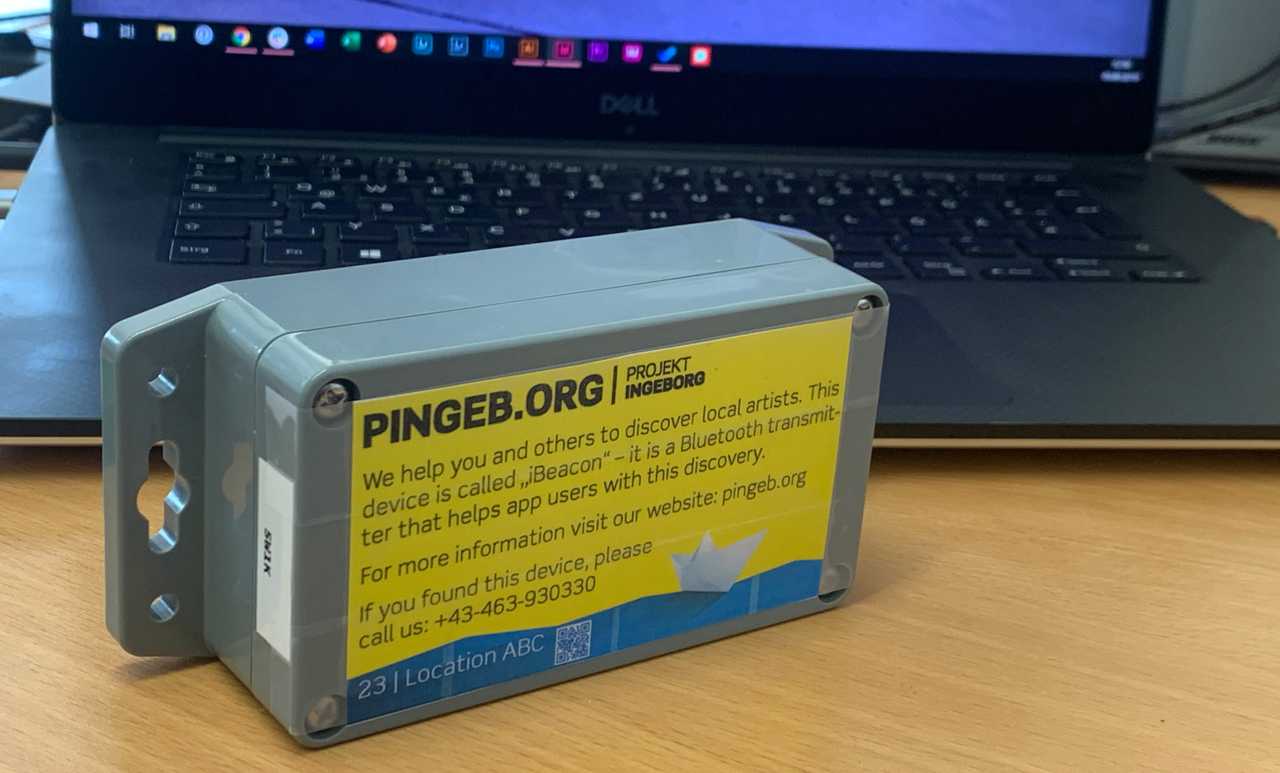 An iBeacon with a note for a possible finder

Adding a note to the Bluetooth has multiple benefits.

All this can be done quite quickly with a label or paper and tape.

Once the beacon is configured, installed and the setup documented, only one thing is missing: a test. Is everything working? Does the device broadcast as desired? Does the range fit the needs? A look at the configuration app of the manufacturer, reveals the battery level.

If necessary, you still have to do some fine-tuning, because the reality usually deviates from the plan – especially with such unpredictable things as radio waves. In the real world, unlike the plan, there are often walls with or without reflections.

So there is no way around getting to where the later users are suspected. Once you’ve tested the system yourself and felt it’s okay, move on to the next location.