Apps soon to be the only way to reach consumers’ phones

In its annual report “Global State of Mobile“, the US market researcher Comscore paints a clear picture: The mobile phone is by far the most important digital media channel and apps are gaining enormously in importance, while all other digital channels are actually losing ground. If you want to reach your target groups, there is no way around apps.

The study was conducted in eight markets worldwide. The conclusion is – contrary to popular belive – that apps must be an integral part of the marketing mix.

Apps have clear advantages over the web:

Apps are not without reason on the wish list of many marketers – but usually only until it comes to effort, price and return on investment (ROI). xamoom proves that apps don’t have to be expensive (699 Euro per month).

The only remaining hurdle is the installation from the App Store, which the end user must take. What’s needed is a value for the user that is greater than the mobile version of the company website and this value must then also be communicated accordingly. If the added value offered is right and this is also well communicated, then nothing stands in the way of use.

But let’s come to the bare figures of Comscore. 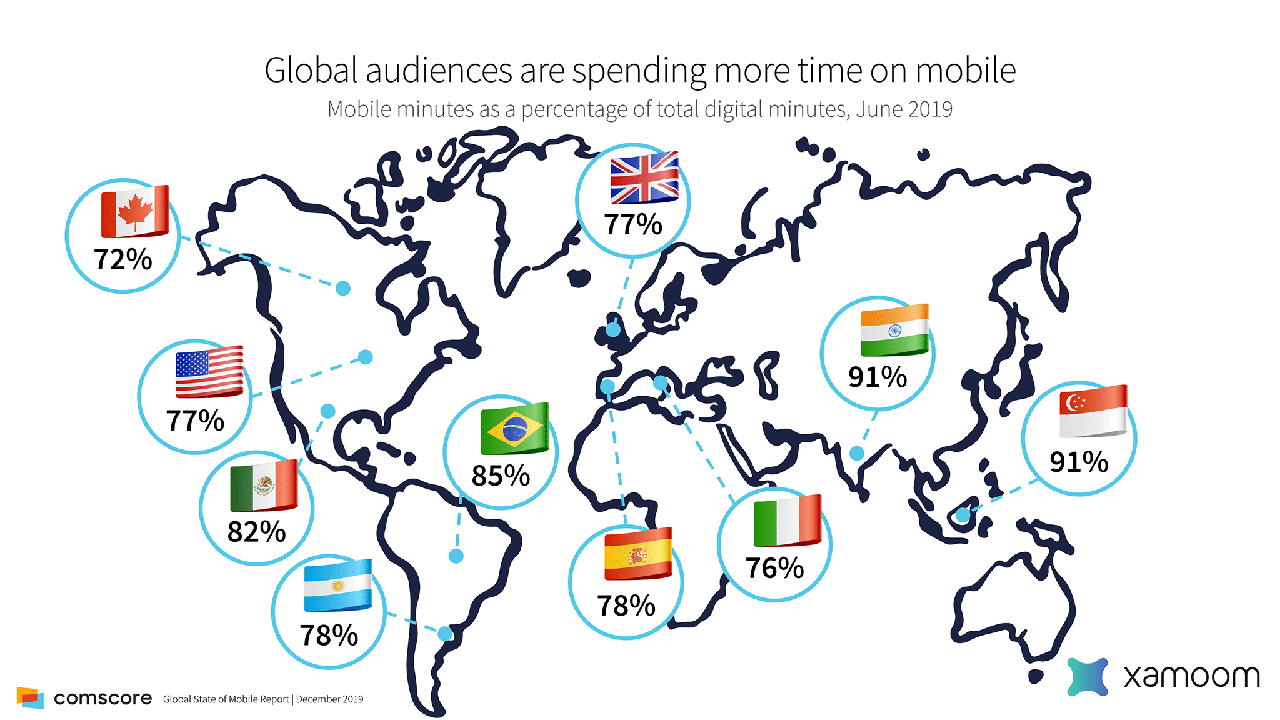 More than three quarters of all media consumption – calculated in minutes – takes place on the smartphone. In India or Indonesia, where there are traditionally fewer computers and more smartphones, the figure is over 90 percent.

In contrast, desktops and tablets account for just nine (Asia) to 28 (Canada) percent of digital minutes. 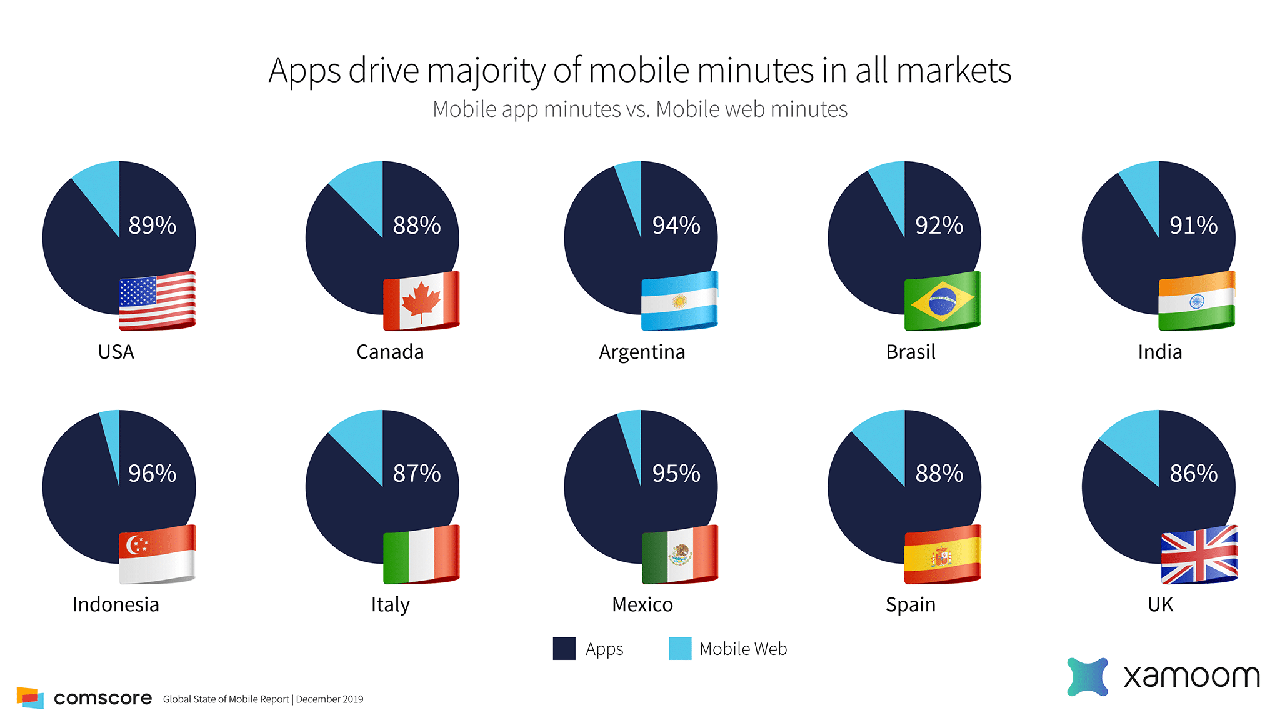 If media are being comsumed on smartphones, then overwhelmingly in mobile applications. The mobile web accounts for less than four (Indonesia) to 14 (UK) percent of all media minutes.

While the (responsive) web still has little chance in the Western world, in Asia or Latin America it is the bare exception. 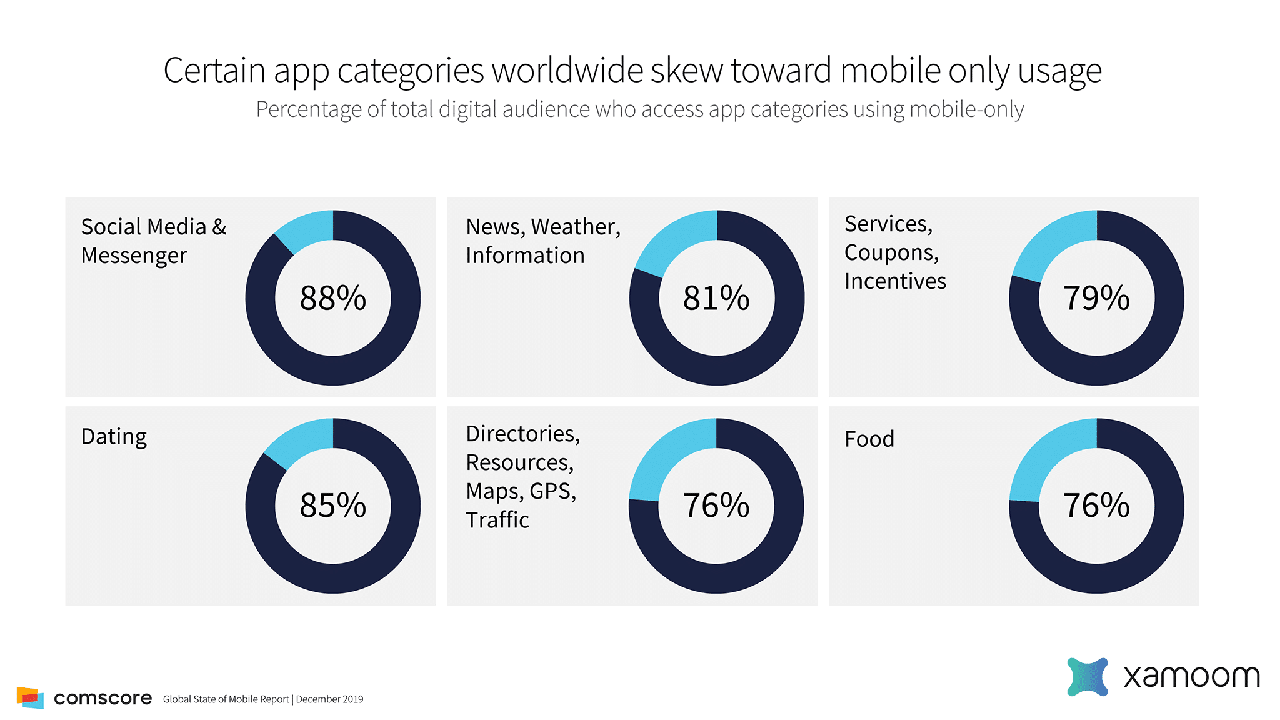 Some categories even tend to become “mobile only” (thus soon: “app only”). With social networks and messengers, you wonder how the browser even plays a slight role. But even in the “Food” category, there is a mobile share of over three quarters, according to Comscore.

If you don’t have an app in these areas, more and more users won’t even find you. 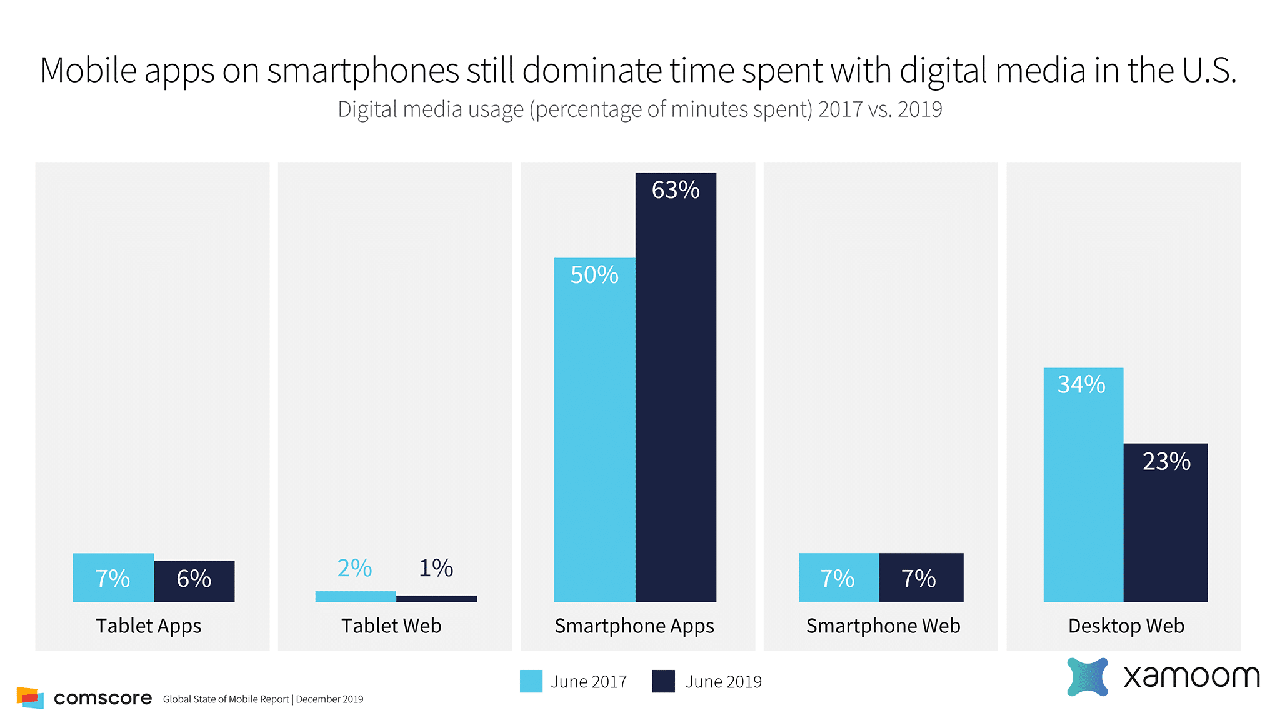 Overall, digital media consumption is increasing year over year. But where this takes place, there are shifts. The only growth area is smartphone apps, where both desktop and tablet devices are losing market share. 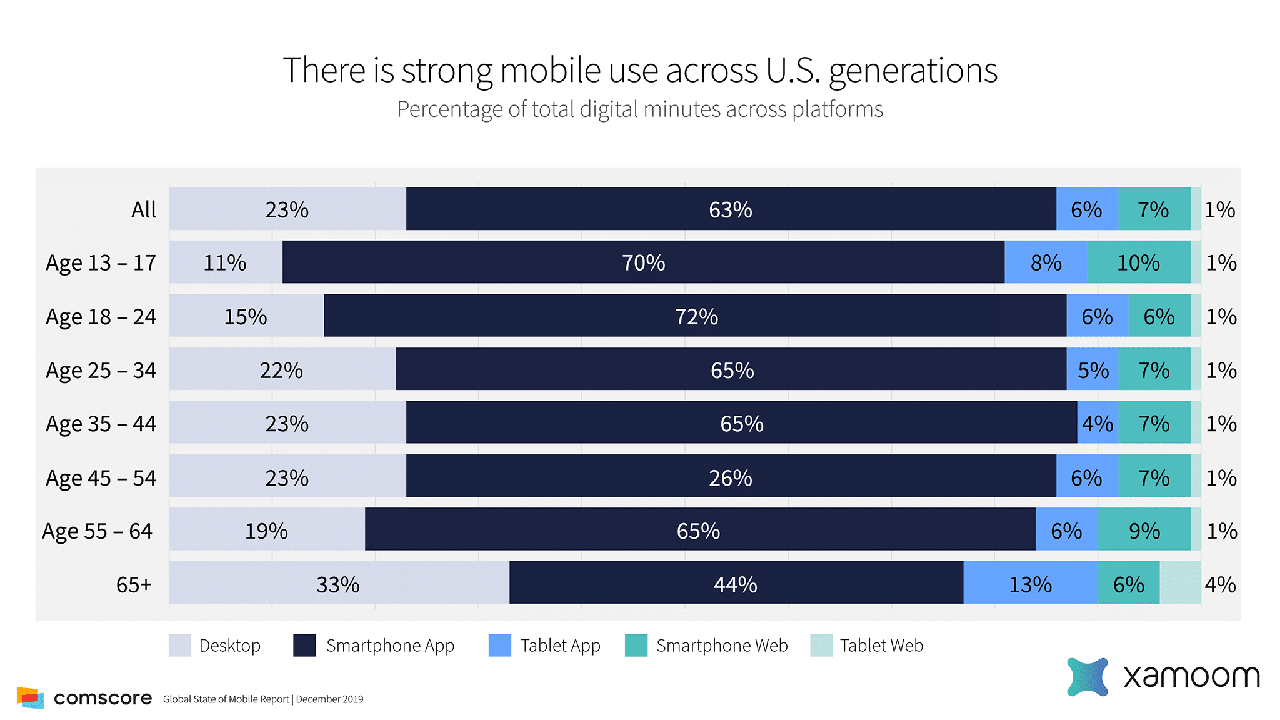 Incidentally, these trends can also be observed in all age groups – from young to old. The mobile minutes are slightly less among older people, while the desktop share is somewhat larger – although the trend in this group is also pointing in a global direction. 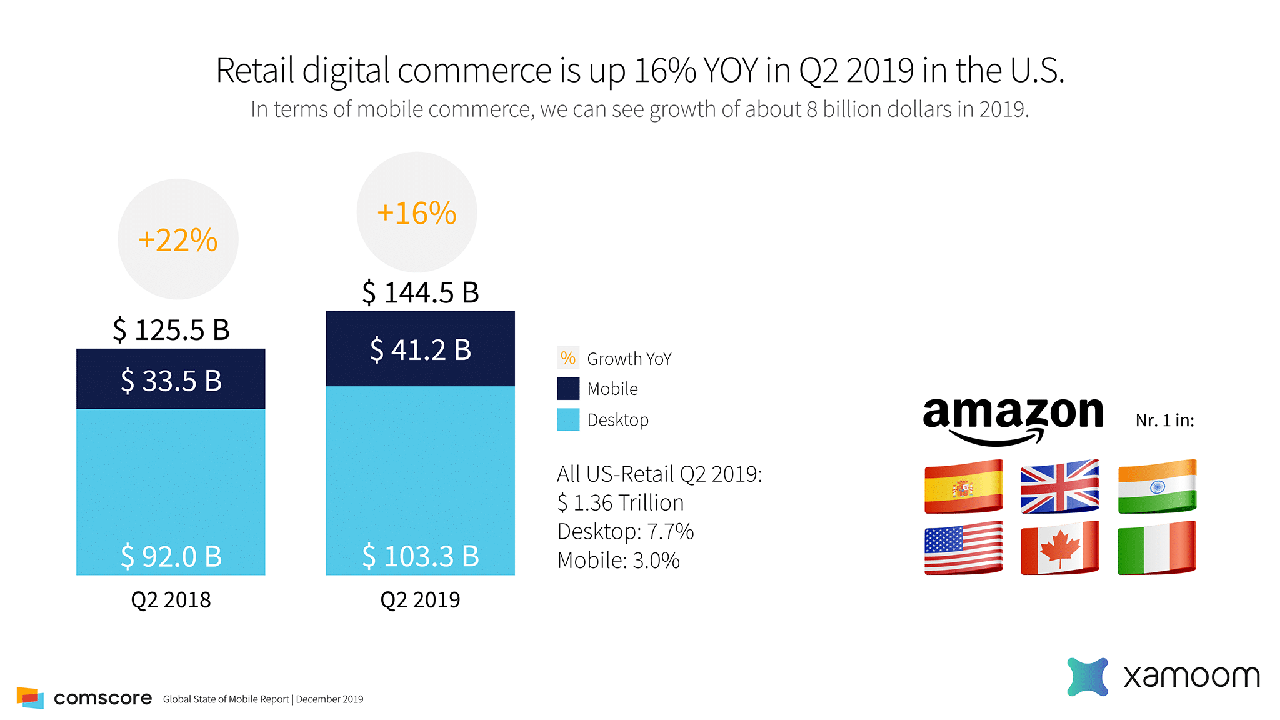 Finally, there is the question of whether it is possible to make money on the smartphone. Comscore’s answer: absolute!

Take retail: 10.7 percent of the US retail volume is digital – a little less than a third of that comes from smartphones, and apps are primarily responsible here. Amazon’s shopping app is the undisputed number one in six of the eight markets analyzed.

Conclusion: Apps are not easy, but a must-have

Smartphone apps are uncharted territory for many organizations and their experience sometimes says: “Nobody would install my app anyway!”

But so much pessimism is wrong and it takes a little courage. Before starting, it must be clear what added value a company can bring to its customers or app users in general. Ideally, the added value must be so high that a customer can’t help but install the app. And even in such a case, the app must still be advertised accordingly.

Have courage! The added value an app provides to your organization can be enormous:

These are just some of the advantages and benefits that companies can derive from apps. The Comscore study shows one thing above all else very clearly: If you ignore the smartphone and apps, you disappear completely from the picture – literally.

as a PDF file

Try for your own what xamoom can do to unleash new revenue potential for your business.

A guided tour through xamoom

About the Author: Georg Holzer

Studied business administration. Got bored, dropped out, became a journalist (not a bad one) and worked on projects in Austria's second-biggest media corporation. Got bored again. Started pingeb.org with Bruno. Got excited about mobile and co-founded xamoom.