Google kills Eddystone. Why it does not mean a lot.

On October 25th, 2018, an earthquake hit the beacon industry: Google surprisingly announced on its Android Developer blog that it discontinues support for Android Nearby Notifications (BTW: look at the URL slug and be aware!).

Eddystone and the Physical Web are dead – effective on December 6th, 2018, Google will stop delivering these notifications to Android users worldwide. The easy way to send messages to Android phones nearby – it worked out of the box with all devices and without an app – is thus gone.

We are hit hard by Google's announcement as well: On behalf of our customers, the xamoom platform distributes useful information about points of interest, local news and event tips, or local artists to Android devices nearby. 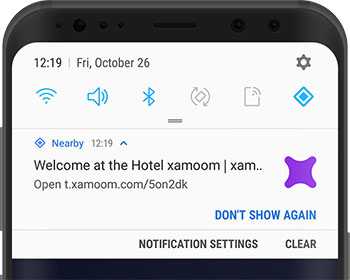 What does it mean?

For us and our customers (no one is using Eddystone only) not much. Except, it got again a bit harder to reach out for potential mobile users/guests/customers. It wasn't really easy with Eddystones too, since their reach was limited: For every 200 to 400 served notifications there was only one content open – depending on the customer and the content (meaning: catchy title and icon). This means a lot of rather useless traffic to phones and one had to target really huge audiences to hit a decent number of people. If someone told you otherwise, you have never seen your analytics.

We at xamoom are still leveraging all technologies (current and future) to bridge the gap between the real world and smartphones: QR codes, NFC tags, iBeacons, GPS geofencing. And next week we will introduce a new set of technologies called ContextIntelligence that leverages machine learning to bring iBeacon-like notifications to apps without the need of actually rolling out beacon hardware (among other features).

Some beacon-only companies (some being sherlocked) will have a really hard time today and in the upcoming weeks to tell their customers that there is no more easy way to get cheap success (if there ever was one). I am really curious about how they will communicate this.