Our Mobile Marketing Predictions for 2016

It is inevitable: At this time of the year, we must publish our thoroughly researched predictions for the upcoming year. Some are obvious, like counting 1 + 1, the others (those at the bottom) are just wishful thinking.

In general, 2016 will be an extremely exciting year for the whole mobile ecosystem. Apple will bring a completely new iPhone (thin, waterproof, and an even better camera). As for the hardware, however, we expect no revolutions. Innovations are marginal, the technology seems to have reached a level of maturity that does not make us say “Wow!” anymore. Most innovation comes from the software and developer related topics for iOS. Google will also bring a major update to Android (Android N or 7.0), while many are still waiting for the (marginal) upgrade of Marshmallow.

Without further ado: What are the five most important trends that are waiting for mobile marketing in the coming year?

5. The Race of the Personal Assistants

Siri, Google Now and Cortana will be joined by Facebook M in 2016. It is a personal assistant, integrated into the social network’s Messenger, who responds to questions, requests, and orders from users in the form of a virtual chat buddy.

The possibility for voice commands in smartphones – whether for searching the web on the go, dictating SMS messages or to control the phone’s functions – will be used more and more in the future. Digital assistants like Siri will also be helpful for businesses to get found in the right context. They will also offer to interact with websites of businesses or to query databases. Apple, Google, Microsoft, and Facebook will eventually open them up by offering documentation for their metadata, commands, and APIs. Studying and using these tools is strongly recommended.

Beacons are small Bluetooth transmitters that have already been deployed in many areas of retail or in sports venues … but only in the US. In Europe, hardly anyone is thinking about them as of yet, despite the enormous potential of this technology in proximity marketing (marketing near the consumer’s location). 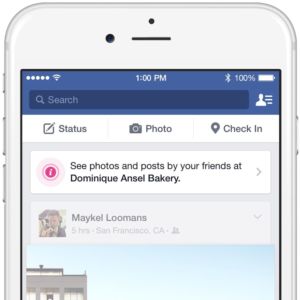 When a customer with the right app installed comes in the vicinity of a beacon, a notification can be triggered or special content can be displayed.

By the end of 2016 significantly more beacons should be rolled out. Beacon awareness will be boosted with the help of Facebook. Last summer, the social network announced its intention to distribute such Bluetooth transmitters to companies. If a visitor with the Facebook app installed visits such a place, an action is triggered: e.g. a coupon is issued or some information or a photo is displayed.

For technology providers like xamoom, Facebook is thus no competition. On the contrary: It creates important attention for what can be done with beacons. For small companies, Facebook’s offer should be sufficient. Medium-sized and larger enterprises, however, should not rely solely on Facebook. And who knows when Zuckerberg might want to see some money for those kinds of interactions?

It will be exciting to see how Google will bring its beacons (called Eddystones) to maturity. While iBeacons are working with both iPhones and Android phones, Eddystone beacons can currently only be used with the Chrome browser on the iPhone. Even though you do not need a special app for it, but instead utilize the mobile browser, what is offered is still too little to be excited about for now. BTW: xamoom was amongst the first ones who incorporated support for Eddystones. The benefit for our customers is still low. For now, but who knows …

Next year, one Galileo satellite after the other will get launched into space. The fleet of the European navigation satellites should rise to 15 in 2016, reaching its full size with 30 satellites in 2020. In 2016 we will see the start of regular operation.

Because Galileo is compatible with GPS, we will soon have twice as many navigation satellites available – in addition to the 31 US satellites. This means faster positioning and especially in urban areas, we will see higher accuracy as well. Devices should be compatible too – at least theoretically. In practice, they will all need a software update. Whether the manufacturers will deliver them is still up for debate. In order to use the full functionality of Galileo with its two-way communication, new hardware will be necessary.

We expect that in 2016 all major manufacturers will offer first devices that will be certified for both western navigation systems (GPS and Galileo) and the already widely supported Russian GLONASS system.

2. LTE brings Speeeeeeeeeeeed to the Alps

In 2016 the first mobile operators in Europe will introduce LTE-Advanced and thus offer a staggering bandwidth of up to one gigabit per second. In the countryside and especially in alpine regions one would be happy with a tiny fraction of that. But next year will bring a big change there as well.

As early as 2013 frequencies of the “digital dividend” (former analog TV) with their 800 and 900 MHz bands were auctioned for LTE usage. By using lower frequencies, significantly greater ranges can be supplied, although with lower bandwidths. If cell towers get their upgrades, they could serve larger areas, which will bring fast internet to rural areas.

It sounds paradox, but it is a measurable trend: While the crowd is getting worse in the app stores, the number of companies that develop their own apps will rise.

You can decipher this already with the example of the United States. In the second quarter of 2015, the app and web traffic was analyzed by Opera MediaWorks. While, according to this study, in Europe, the mobile web traffic was still significantly higher, the ratio in the US is exactly the reverse. Across the Atlantic, there are obviously more companies that spend their time and money on their apps.

The real question remains unanswered: Is the US ahead or Europe and Asia? Leaving aside the question of apps vs. the mobile web there are plenty of good reasons to finally acquiring a mobile strategy:

The problem with the app development is a balancing act between the high costs on the one hand and on the other the declining installation numbers for individual apps. The solution for this can only be cheaper costs through pre-made SDKs and easy integration of APIs (see our developer pages).

The need for own apps is driven primarily by three technological developments:

We wish you an exciting and successful new year.
Cheers, 2016!