What could go wrong before roaming ends in June 2017

It is fixed but many do not believe it: From June 2017 on there will be no extra charges for roaming anymore. The packages (phone minutes, SMS or data) that are available for your domestic use can also be consumed in the entire EU as well as the EEA countries Iceland, Liechtenstein and Norway.

Until the end of this year, some details need to be negotiated. For example, the duration of roaming might be limited, keeping you from buying a cheap sim card somewhere. These negotiations could theoretically be a showstopper. However, no one wants to be the bad cop here since most Europeans are looking forward to seeing an end of the enormous roaming fees.

For companies like xamoom, the end of roaming means a tremendous opportunity. Especially on holidays or when traveling abroad, the phone can be an entertaining and informative companion.

We spoke with the Austrian MEP Paul Rübig, who was part of the negotiations from the beginning. 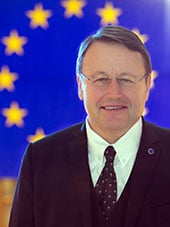 Both the European Parliament and the European Council have already approved the end of roaming within the EU. Is it already set to stone?
PAUL RÜBIG: The fees dropped this year again significantly. By June 15, 2017, the roaming surcharges will disappear entirely. From then on, the cost of telephony, SMS, and data in another EU country will be the same as it is at home. There will be a “Fair Use Policy” that the European Commission must set and publish until the end of 2016. For example, you must be at home once or for a certain period of time (e.g. two months) per year. The specific provisions on fair use are still being negotiated.

So, what needs to happen until it is really a fact?
PAUL RÜBIG: The European Parliament and the Council have agreed on the abolition of roaming surcharges. Thus, the political agreement necessary is already given.

There are still many who do not believe that roaming will definitely come to an end. How do you explain this?
PAUL RÜBIG: From the signature of the first roaming regulation in 2007 to the complete abolition of surcharges in 2017 ten years will have passed. Sounds long and I would have liked an earlier elimination. But it takes time to bring the 28 member states on a line. Unfortunately, many national governments have blocked, including the Austrian.

Can it ultimately still fail at anything?
PAUL RÜBIG: Theoretically, yes. Disagreement about the wholesale arrangements and to the fair use provisions would create confusion.

Will people who are staying often and longer in other EU countries have to pay more?
PAUL RÜBIG: The decisive factor will be what comes out in the above-mentioned negotiations. I will continue to work on a genuine European single market in the telecommunications sector that no longer makes a distinction between domestic and EU.

Do you think that this is actually going to happen?
PAUL RÜBIG: Yes. Because national borders have become completely irrelevant. Because of the single market we can already live, travel and trade freely. The necessary and reasonable will prevail here as well.

How would consumers benefit from a single market? What would be different?
PAUL RÜBIG: It would make no difference whether you make a call from Klagenfurt to Paris or from Hannover to Salzburg or if you were writing text messages. It would be the same whether you use Snapchat on a beach in Italy or sent an image with WhatsApp from a Greek island or do this in my hometown Wels.