We constantly think about what the future holds for us, after all, we want to be prepared for it. Once a year, we sit down and write down this. In the preview of the mobile year 2019, we were on the right track in a few points. Here is our daring look into the glass bowl for 2020 – an extremely exciting year.

1. Internet from the stars

2020 will bring us not only 5G. A much bigger impact on the future will be the Starlink project launched in summer by billionaire and Tesla founder Elon Musk. An estimated 300 to 600 satellites will then be ready to provide the US with a fast internet from space in trial operation.

In the final stage, it should be – according to older plans – 12,000 satellites (current price per unit: 500,000 dollars). Just recently, 30,000 additional satellites have been registered with regulators for approval – that would be eight times the number of satellites launched into space since Sputnik.

The planned investment amounts to ten billion dollars – nothing compared to the worldwide investment in 5G or the cost of Europe’s Galileo program. Alone for an area-wide expansion with fast Internet in the USA approx. 150 billion dollars is estimated.

Musk’s goal is multi-layered: on the one hand, he wants to offer very fast Internet at competitive prices all over the world and thus dig up the water for all the telecoms in the world. On the other hand, the project with a planned annual turnover of 20 to 30 billion dollars from the year 2026 could finance his ambitious plans for the colonization of Mars.

Until then, lots of satellites need to be launched into space and here comes another advantage: Starlink’s sister company is SpaceX and it can provide cheaper flights than his competitors will have. Currently, there are 117 satellites in space and the network is already working, as Musk revealed in a tweet. At the end of 2019, there will be one more launch. As of 2020, two starts per month, each with 60 satellites, were announced. By 2026, according to the US regulator FCC, all 12,000 satellites must be in orbit.

Starlink has nothing to do with the unaffordably priced and lame internet from space, which is already known from the geostationary satellites of Iridium & Co. On the contrary: Due to the high number of satellites and the extremely low orbit of the satellites of only 550 km, enormous bandwidths and extremely low response times are possible.

How this can work? Light via laser is 47 percent faster in the vacuum of space than in a fiber-optic cable. The longer the distance (for example, London to New York or even New York to Singapore), the bigger the speed bonus in space. Who is interested in this? The financial industry, which counts every millisecond between two stock exchanges. Details are explained this video:

But there is still a lot to solve before the start: The project was quiet for a while because work on the end devices slowed it down. Consumers should be able to easily install the 200 dollar antenna in the shape of a pizza box.

Even if there is nowhere talk of it, there will certainly be not only stationary antennas but eventually also mobile devices. Wanna bet, that in a few years we will also get an iPhone or Android devices with Starlink and without a damn SIM card? When this is to be expected, is up to speculation as well as the pricing and availability in Europe (probably in mid-2021).

In addition to global availability, high bandwidths, and low latencies, there will be a lot more that will be of great interest. For example, Musks tweeted about a whole new protocol that is simpler than IPV6 and based on the peer-to-peer principle and end-to-end encryption across the entire network.

Internet service providers around the world will probably not have too long to crack and digest the hard nut from space. This, especially since Amazon and OneWeb forge similar plans.

We have already predicted a completely new wireless technology for 2019. Ultra Wide Band (UWB) was indeed integrated into the iPhone 11, but Apple hushed the technology otherwise.

A pity, actually, because there is a lot of potential in it. Here are our slides from Mobile Content Day 2019: 2 (they are in German but most of them are image slides anyway). 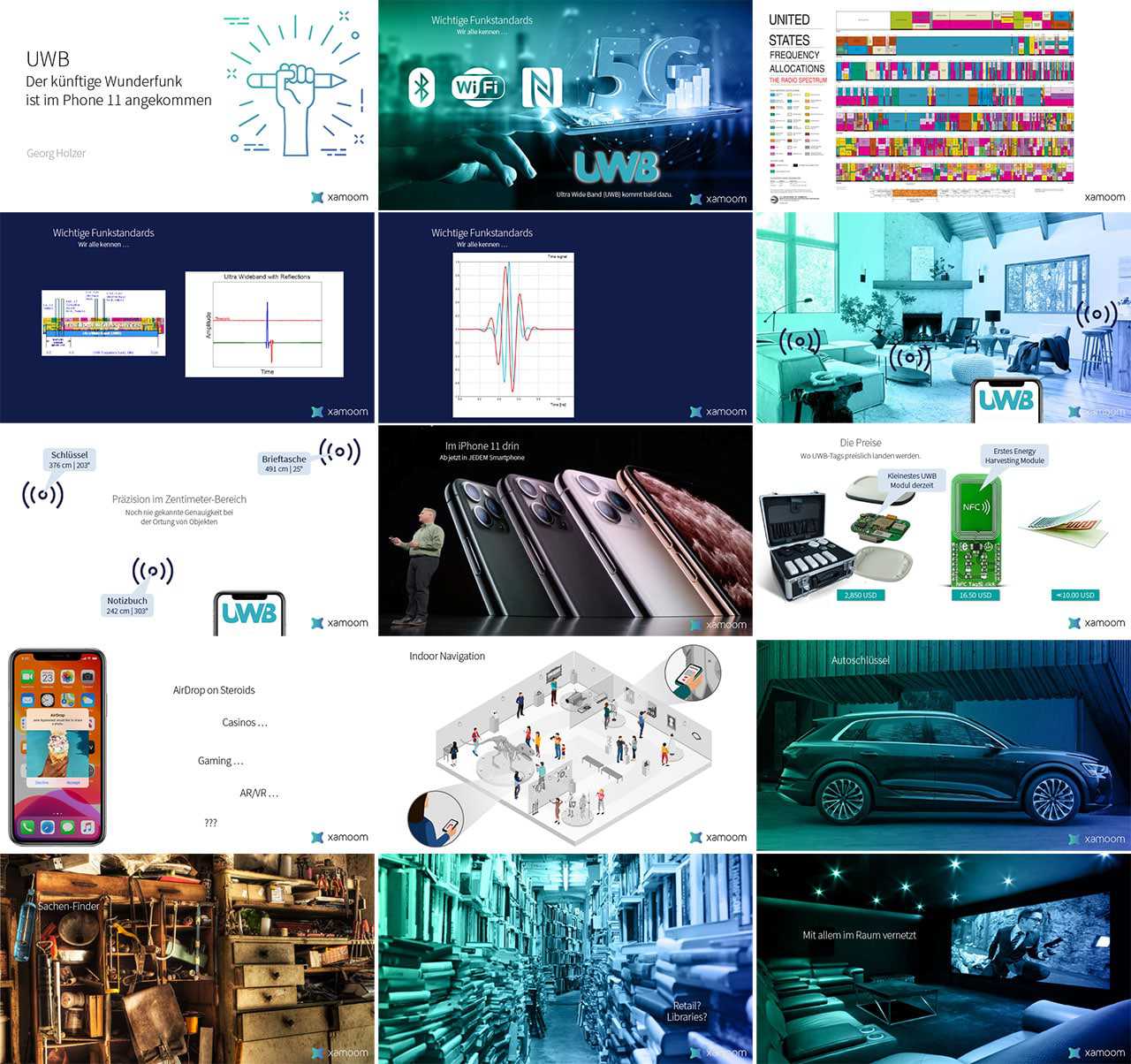 The technique briefly explained: Short, but violent impulses occur over a very broad part of the radio spectrum. This enables a very precise localization of the object with the tag (UWB tags currently have the size of an iBeacon), while at the same time minimal energy consumption.

The applications are wide-ranging. In the summer of 2019, it was speculated that Apple could introduce a service for finding objects (with Apple tags). UWB could also replace iBeacons in museums or retail stores and ultimately replace the car key. And finally, casinos expressed an interest in the technology and it could bring improvements to augmented or virtual reality.

After UWB is already integrated into new iPhones, in 2020 we should also see many Android devices equipped with it. Thus, the first services will appear. We at xamoom are watching the situation closely and as soon as public interfaces of iOS or Android are available, we will support the wireless standard.

Machine Learning can very well analyze the habits of users (completely anonymous). As this person increases the app’s usage, conclusions can be drawn and suggestions presented to the user.

Apps that are equipped with machine learning technology are smarter and subtly make their suggestions by proactively designing the entire user interface or parts of it. These mutations are specific for every user. This creates a very personal tour guide or assistant who can best assess the user’s preferences.

Such smartphone apps and mobile web applications are currently in the focus of xamoom because their recommendations have a high degree of accuracy, which is why the use of apps is increasing.

Are you interested in taking a look? A quick message to mail@xamoom.com and we’ll get back to you. Click here for a blog post about our prototype for Context Intelligence.

Dead ones live longer: in 2020, QR codes will lead to an unprecedented revival. How do we substantiate this courageous statement?

Another technology, whose end seemed already fixed, returns in 2020: Beacons without an app. Google killed the technology (then under the name Eddystone) in late 2018, but now they are now attacking again. Since mid-December 2019, Chrome 79 can listen to Bluetooth Low Energy (BLE) beacons.

But instead of reacting to beacons with annoying notifications, web developers can react to beacons on a web page. With this information, their content can be adjusted accordingly – the useful “What’s near me?” will soon be possible very conveniently without an app.

Now, the technology is experimental (you have to enable a special flag in Chrome) but it is foreseeable, that Android will bring this soon to the mainstream. As it comes to Safari, one thing is sure: Apple is not fast in implementing new features or web standards.

In any case, this is an important step forward and xamoom implements that as soon as it is useful.

The breaking of rules is in the foreground in the new year when it comes to design trends. The blog Graphic Mama summarized digital fashion 2020 very well.

Oh yes, the dark mode will an integral part of every good app.

Try for your own what xamoom can do to unleash new revenue potential for your business.

A guided tour through xamoom